Entrepreneurship Development Cell of Alva’s Institute of Engineering and technology in association with Department of Civil Engineering had organized a guest talk on “GRASSROOT ENTREPRENEURSHIP DEVELOPMENT” by Dr.Santhosh Kumar Pattanayak who is a Former Managing Director in Indian Railway Finance corporation, on 26/10/2019 at 12:30 pm. The guest was preceded on to the dais by Dr. H Ajith Hebbar, H.O.D of Civil Engineering Department through a floral welcome. The guest along with the gathering was welcomed by Dr.H Ajith Hebbar through a welcome speech. The sequence of the programme was followed by introduction of the guest about his achievements by a student of civil engineering department. The platform was then opened to the guest speaker for an interactive session with the students.

Addressing the students Dr.Santhosh Kumar Pattanayak spoke about the importance of entrepreneurship and the reasons for not being an entrepreneur. Further discussing the risk involved in taking up entrepreneurship was delivered to the gathering. The guidance to become an efficient entrepreneur was then conveyed stating that “The opportunities are many but holding the right skill level to grab the opportunities is very much essential to become a good entrepreneur”. The concept of C-NET that stands for Centre for Nurture Entrepreneurs Talent was discussed and the main objective lies in the Grassroot Entrepreneurship Development which involves training the budding entrepreneur. The steps involved in C-NET concept was then delivered, which include visualizing the power of the country, break the pattern present in ones mindset, creating opportunities and build the scenario to fulfill the opportunities. At the end, he encouraged each and everyone to strive hard to make the villages a developed one through GED to connect the islands of excellence. An example of Hosangadi village, where the working of C-NET product at a virtual level and its working was briefly explained by the speaker. The platform was then opened for a questionnaire session with the students. The trustee of Alva’s Education Foundation Mr.Vivek Alva presided over the programme and addressed the gathering. The guest was honored with a memento as a symbol of gratitude by the institution which marked the end of the session.

PHOTOGRAPHS OF THE EVENT: 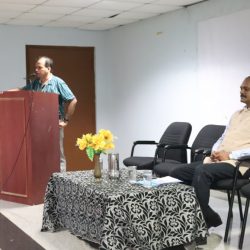 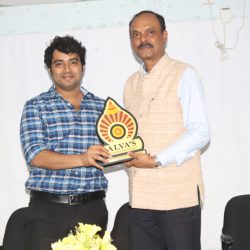 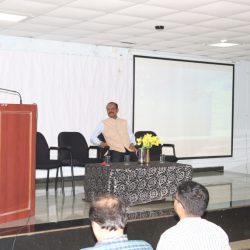 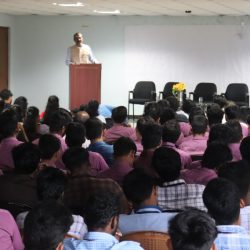 A guest talk was organized by Entrepreneurship Development Cell, AIET during the boot camp for Final Year Engineering students on 05/08/2019 between 5:00 PM to 6:30 PM in the AIET Auditorium. Mr. Ashwath Hegde guided the Students on Entrepreneurship Opportunities in India. 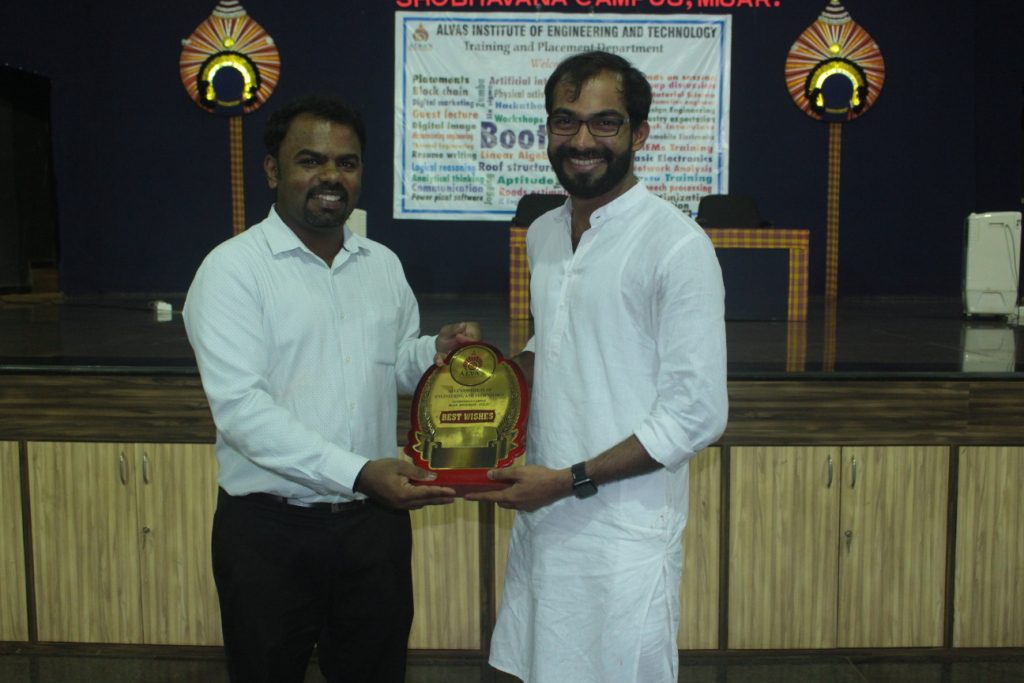 ‘’Business or entrepreneurship is a field that requires in depth knowledge of economy, people and marketing strategies,” said Ashwath Hegde, Founder and Managing Director, Envigreen Biotech Pvt. Ltd. He said that one cannot even succeed in the field of business with outdated ideas. It is a field which requires people to think something new, unique and yet reliable.  An entrepreneur or a businessman should have a witty brain, should focus on his goals. There are plenty of opportunities available for those who aspire to be entrepreneurs. Making money is not the ultimate aim of business. Instead one should give back to the society or community, he advised.

Prof. Sushanth Lobo, Placement Officer and the Convener of the boot camp presented a memento to the Speaker as a token of gratitude.

Prof. Sanjay S, Co-ordinator of Entrepreneurship Development Cell conveyed the vote of thanks and concluded the programme.

ENTREPRENEURSHIP AS A CAREER

GUEST TALK ON ENTREPRENEURSHIP AS A CAREER

A guest talk was organized by Entrepreneurship Development Cell, AIET during the boot camp for Final Year Engineering students 0n 01/08/2019 between 5:00 PM to 6:30 PM in the AIET Auditorium. 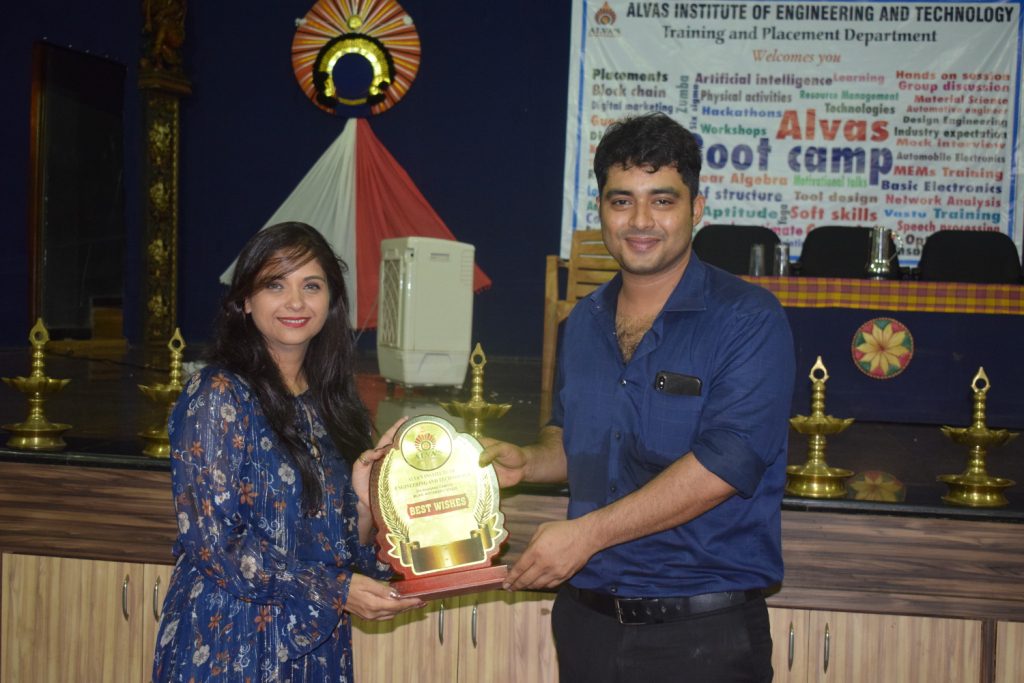 Apoorva  Mulani,  addressed the gathering on the topic ‘Entrepreneurship as a career’.  She told new ventures generating enormous wealth for the entrepreneurs and an entrepreneur must possess certain qualities while starting up a new company of their own. Further she spoke about the smart browsing app “pop Shot”, which is the world’s first ever interactive browser built for smart phones and interactive screenshot feature launched in India. She sensitized the gathering on various internship programs available for the students, planning for a new start up.

In her concluding remark she spoke about the major aspect of entrepreneurship that is to “understand the market and the audience”.

Mr. Vivek Alva, Managing Trustee, Alva’s Education Foundation presented a memento to the Speaker as a token of gratitude.

Prof. Sushanth Lobo, Placement Officer and the Convener of the boot camp conveyed the vote of thanks and concluded the programme.

The talk was held at Engineering seminar hall, AIET for which the members of Entrepreneurship Development Cell (EDC) and Innovation Club took part in large numbers. 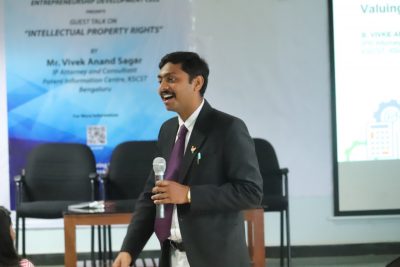 Vivek Anand Sagar, IP Attorney and Consultant, Patent Information Centre, KSCST, Bengaluru was the guest speaker, who started off the session by making the students understand the intellect everyone possessed and how important it was to safe guard our ideas, thoughts and innovations.

He interacted with the students by picking up real life examples which clearly made the students understand the importance of IPR.

He also gave information to the students of the final year regarding how the government was funding for different, innovative ideas so as to start their own firms and pick up entrepreneurial life. He spoke about the principles of IPR and how by abiding those one who possessed an unique idea could easy patent his/her ideas. He spoke the rewards one could get if he/she put some effort to patent their idea. He also emphasized on copyrights, trademarks and royalties ones were getting whose patented their intellect.

He spoke about the tenure the patent would last and also added the scrutiny methods the centre adopted to ensure one’s right. He streamlined his thoughts towards engineering and technical domains where he told who the prototype or product should be industrially applicable to receive a patent.

He spoke about the non-obvious ideas in industry which should be looked before filling for a patent. He educated the students how an idea would be called a non-obvious idea by skilled people in the sector or domain of industry concerned.

At last he gave an insight about which ideas could not be patented. The students were well educated about the importance of IPR and how one could claim their rights over their thoughts by the end of the talk. 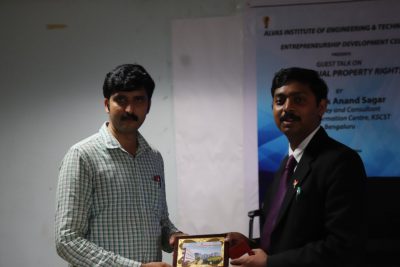 Prof. Sanjay S, EDC Co-ordinator, AIET, conveyed the vote of thanks for the program and presented a memento to Mr. Vivek Anand Sagar and concluded the program.