“Indian cinema has been one of the best and finest creative works in world cinema. The works of Satyajit Ray, Raj Kapoor and many others inspired world cinema and became popular. The elements of Indian cinema touch upon various aspects of culture, tradition, heritage and lifestyle,” said Indologist and Professor of Polish Language at Department of European Studies, Manipal University, Dr. Tatiana Szurlej.

She was speaking on the occasion of a Guest Lecture organized by Rostrum- Speakers’ Club of Alva’s Education Foundation, Moodbidri on 16th October on the topic “Western Perspectives of Indian Cinema”.

She emphasized that Indian films are unique in their own way. “Bollywood films are often called musicals, but examples show that all the songs play quite a different role in Indian movies than in classic Hollywood musicals. There is a very deep logic lying behind film production, and popular Indian cinema uses its songs to show everything that is impossible to show in the story”, told Dr. Szurlej.

She said, “Filmmakers know very well that songs are the element of fantasy, which when used in a story about everyday life, can show things that are impossible in natural experience.”

Dr. Szurlej interacted with students after the talk. Aishwarya compered the programme. The event was coordinated by Prof Deepak Raj and Prof Gurudatt Somayaji and Rohan D’souza, AIET, Mijar.

Dr. M.K. Sridhar the former member of the Karnataka Knowledge commission spoke on “Youth and Young” on 5th Sep 2015. He spoke on the necessity to be young and not youthful. The mental age supersedes the physical or biological age. The benefits of being young shared and his own success story was shared, though he was differently abled.Prof.R. Vaidyanathan, Professor of Finance, Indian Institute of Management, Bangalore spoke on “Global Indian Crisis-Indian Response” on 12th Sep 2015.

Brigadier I N Rai, spoke on “Life at Siachen” in April 2016, his experience at Siachen Glacier was shared, the environment and various problems at that altitude was discussed. Also the recent rescue operations video was displayed giving the audience the reality feel.

Alva’s Education Foundation (AEF), Moodbidri has always believed that communication and confidence are two important tools that shape up an individual’s career along with content.

The philosophy is to prepare students for professional world including academics and corporate. With this thought in mind, AEF has provided a platform for students Rostrum- Speakers Club. Rostrum provides an avenue for public speaking. The objective of this forum is to provide an opportunity to members to listen to speakers, clarify their thoughts and dispel the doubts directly from the experts on prevalent social, economic, political topics. Thereby instilling confidence in them to speak and to nourish their hidden talents, and also pave the way to face the world with courage and thus bring betterment in the society. The current year has over 300 student-members across different courses such as medical, paramedical, engineering, management, commerce, nursing etc., 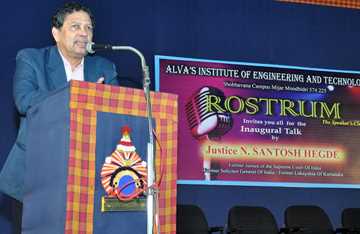 Current education concentrates more on domain subjects and less on teaching ‘moral values’. Moral Science which was taught in schools and which had a key role in developing values in individuals has been scrapped, said Justice N Santosh Hegde, former Lokayukta. This, he asserted is the main reason for man becoming corrupt and focussing more on amassing materialistic wealth, much beyond his stated needs. This has resulted in major fall in values in society. Inaugurating Rostrum, the speaker’s club of Alva’s Institute of Engineering and Technology here on Saturday, Santosh Hegde stressed on the need for imbibing values at a young age. He rued the fact that the Indian Constitution that is meant ‘for the people, by the people and of the people’ has since come to mean ‘For some, by some and of some’ after but it its repeated misuse by many for their own selfish ends. “This is also because of the lack of moral values in society,” he said.

To curb atrocities including rape, he said the citizens’ conscience has to be awakened so that law is never misused. The right use of law makes the law stronger and enforceable easily. At an interactive session later, to a question on the Irom Sharmila issue, he said the armed forces are protected by the Armed Forces (Special Provisions) Act, 1958. To a query on justice delayed being justice denied, he reminded the questioner that it is also true that ‘Justice Hurried is Justice Buried”.

Asked on what he felt about the current Narendra Modi government, Santosh Hegde said that there is an element of freshness in this government as it is new and it does not have the obligations, pulls and pressures of coalition government. It should answer questions on communalism at an appropriate time and concentrate on development issues. There is a lot of confidence in the government and development has to happen, time would be the deciding factor.Public representatives are in reality public servants, Santosh Hegde said in an apparent reference to Modi’s reiteration of this very fact from ramparts of Red Fort that he was their Pradhan ‘Sevak’. However, it is travesty of justice that public servants behave like public masters. The most important reason for fall in values is the society itself. The youth of today have a major role to play to root out corruption as the older generation also is a party to the faults, he said. 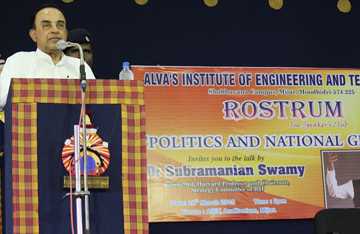 Speaking on national growth, he said, “National growth takes place when the quality of living of the people goes up. The western world thinks that progress lies in material prosperity. The Hindu thinks material progress should be harmonized with spiritual values in order to be happy. More material prosperity leads to greed. When there’s greed, moral character will be ruined and you will be unhappy. To be at the highest position, sacrfice your material greed and acquire knowledge.

Earlier in his talk, Dr Swamy emphasized the richness of Indian civilization and said, “India is the only country considered by UNESCO as having unbroken continuing civilization out of the 46 civilizations in the world. Even the Greece is not what it was in the past, nor is Egypt or Iran. Forty-five civilizations have disappeared due to invasions and conquers. Ony 46 civilizations are surviving though they have been attacked or ruled for centuries.

“Though there were attacks on India we did not surrender but fought back. Look at the history books written by the British for you – they have separate chapters for each Moghul emperor from Akbar to Aurangazeb, but there is only one page on Vijayanagara empire. We should learn from history about how developed India was thousand years ago. People from all over the world came here to learn, study and buy goods. Even a large number of books were written on the greatness of India. But somewhere in the middle we lost it, and we are yet to recover that glory.

Calling upon everyone to join in the process of transforming the country, he said, “Find an alternative for fuel and help your country, because 86 percent of our oil depends on Arab countries. We should think of how we can make India a great economic power. You need economic well being to survive, and if you accumulate a lot of wealth, build educational institutions and donate to society and do not hide it in Swiss bank. Many suffer because of degeneration of society, especially the SC/STs. There are people who for centuries were suppressed. We have to uplift them. Mind is most important and it tells us how to deal with a situation. If you have conservative mind you will not achieve anything. Every Indian should be a rational risk taker to achieve national growth.”

He further added, “India should be transformed back to where we were – a prosperous, spirirtual, scientifically advanced country. Our rishis (sages) described the movement of sun and stars. In Europe they believed that sun revolves around the earth, and when Galileo opposed this, all Italians beat him and made him apologize. In contrast, though there were different views in India, there was freedom of expression. This country should be transformed through new innovations. US moves forward because of innovations. Nearly 70 percent of the Indian population is below the age of 35. We are the youngest nation in the world. The average age of the population in India is 26 years, in China it is 35 years, in USA 37 and in Europe 46. There is no shortage of anything in India. This country has numerous alternative sources of generating funds.”

“Politics is the most efficient and effective way for transforming Indian society. In other democratic countries the best educated people go into politics. Here (in India) politics is entirely different.” 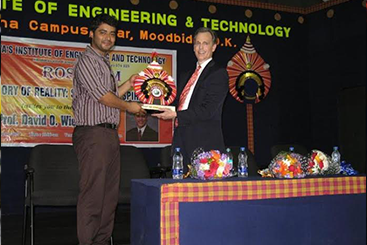 David O Wiebers, Emeritus Professor of Neurology, MAYO Clinic in Rochester, Minnesota, USA said theory of reality is comprehensive new theory regarding nature of consciousness and nature of universe. David also explained the state of consciousness through working of brain. Enlightenment of individual and society is based on scientific thinking and spirituality. Theory of reality envisages that brain activity and consciousness are independent and provides core basis of evidence establishing ability to exist and functions separately without the brain. Brain functions correlates with states of consciousness which in turn are correlated with various brain structures. There is no evidence to prove that physical brain is source of consciousness.

There is no identified feature or structures of the brain that are capable of producing consciousness. He explained these with the help of quotes from various scholars such as Wilder Penfield, Noble Prize winning neuroscientist Bouwmeester, Gisin and others. Approximately 100 trillion cells in the human body exchange signals constantly and interact in a single system which is beyond the capability of human brain to fully comprehend. 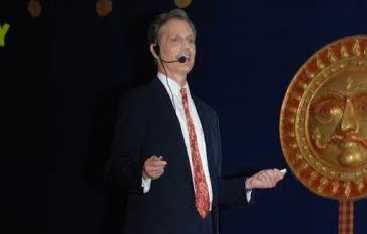 The coherence of living organisms including monitoring his or her environmental sights, sounds, smells, taste and other sensations while walking on a crowded street, healing process in the human body, food digestion, pumping blood through heart and circulate to the organs are best examples of these.

Instantaneous coherent signaling which is calculated to be approximately 20,000 times the speed of light is beyond the imagination of brain capacity. According to him, information exchange in human beings cannot be explained by classical materialistic scientific means.

Outstanding contributions of great scientists and scholars are nothing but the peak experiences, which generally have profound and lasting beneficial effects upon people. He explained Theory of Reality through the near death, out of body, past life recall and after death contact experiences which probably is there in all religions.

Pay your application/admission fee online via our online form.