The Republic Day celebrations are commemorated every year to honor the formation of the Indian constitution. As a part of this celebration, the Alva’s Educational Foundation organized a grand ceremony, which withstood more than 33000 audiences in the Vanajakshi K Shripathi Bhat amphitheater on 26th January, Saturday at Puthige.

Patriotic fervency penetrated the atmosphere as students, embellished in the colors of the national flag, lined up at the venue with miniature flags in hand. The special attraction of the festivity was the presence of 300 ex-servicemen of the Indian army gathered to witness the proceedings with utmost pride and honour. At the very outset, march past by more than 2200 NCC cadets from Bangalore, Mysore, Belagavi, Bellary and Mangalore groups, 400 Scouts, Guides, Rovers and Rangers marked the beginning with their swing and sharp uniforms displaying their pageant in a disciplined manner.

Students were dressed in t-shirts of colors of the national flag and were made to stand in such a way that the aerial glimpse resembled “India” in textual form.

Subsequently, the integration song ‘KotiKantose’ was sung by the cultural team of Alva’s Education Foundation for which the amassed gathering waved the miniature flags in unison throughout the rendition of the song. The amalgamation of the audience was a feast to the eyes and soul which grappled everyone’s attention with an overwhelming feeling of nationalism.

After unfurling the national flag, Brigadier, D.M Purvimath, VisistaSeva Medal, said, “We need to craft a modern India that is both a land of talent – and land of unlimited opportunities for that talented. So, it could be materialized and India will be the strongest country in the world, only when we all work together”.

“An innovative nation is built by innovative children. This must be an obsessive goal of all Institutions and our schooling system has to encourage our children to think and to tinker, not just to memorize and reproduce. In fact, children are the pillar of this country.” He said. 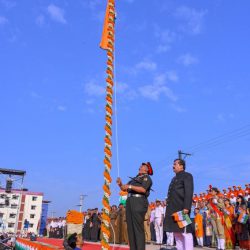 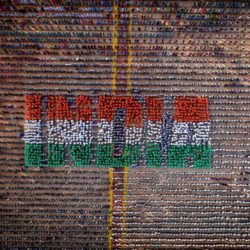