The AIET ISTE Student Chapter organized a technical talk on 15th February 2019 which was delivered by Dr. 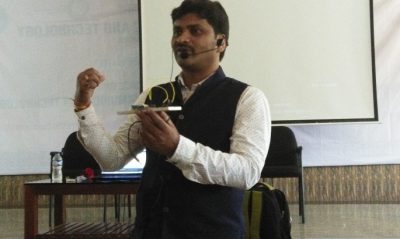 Mouneshachar S. Associate Professor, Dept. of CSE, GNIT, Davanagere. He spoke on the topic of “IOT and its Applications”.

In this session, first he spoke about the Internet of Things (IoT) has been paid more and more attention by the government, academe and industry all over the world because of its great prospect. He introduced the concept of IoT, the basic properties and characteristics. Then discussed the key technologies of IoT in detail taking the wire-less sensor as a small experiment, and the application of IoT was illustrated by its typical use in environmental monitoring.He spoke about smart systems and how IoT are driven by combining three things which include sensors and actuators, connectivity, people and processes he also highlighted about usage of IoT in smart agriculture. He explained importance of IoT in home automation He then answered a few questions asked by students.